On February 5, 1961, Billy Graham was in Tampa, Florida for one of his one-day stops, where he held a mammoth rally in an athletic stadium. George Beverly Shea was the soloist for the gathering, and afterward it was my privilege to interview him concerning his song, I’d Rather Have Jesus. The following is the sum and substance of what he told me concerning his song. 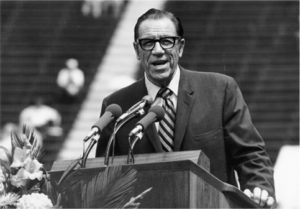 He said, “I wrote I’d Rather Have Jesus in 1933. As I sat one evening playing the piano, my mother brought to me a piece of paper on which was written a poem by Rhea Miller. She thought it to be a very wonderful poem and wanted me to read it. She then asked me to try my hand at writing a melody for the verses. I began to play as a melody came to me. It seemed to fit the lyrics and so I began to sing, for the first time, I’d Rather Have Jesus.”

Than to be a king of a vast domain
And be held in sin’s dread sway.
I’d rather have Jesus than anything
This world affords today.

Mr. Shea was born in Winchester, Ontario, Canada and had the advantage of good musical training early in life. In early years he had his share of the lucrative offers of this world, but he thoughtfully turned them down to become a singing servant for our Saviour.

Beginning with Billy Graham in 1944, George Beverly Shea carried the Gospel in song to every state in the Union and to every continent of our world. “I first met Bev Shea while in Chicago when he was on Moody Radio,” declared Mr. Graham. “As a young man starting my ministry, I asked Bev if he would join me. He said yes and for over 60 years we had the privilege of ministering together.”

When the rich voice of George Beverly Shea is but a memory, many happy Christians will still be singing, I’d Rather Have Jesus.

The name Blackwood Brothers, a group formed in 1934, is synonymous with Gospel Music. Their songs, by way of radio, recordings, television and personal appearances, have been heard around the world. Although during their tenure they have known happiness, success and acclaim, along the way sorrow and extreme loss have visited them, the likes of which is hard to describe in this limited space. 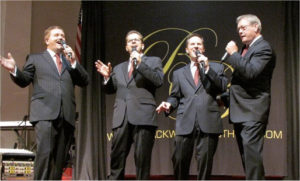 The original group enjoyed a musical journey like very few singers could imagine. Among their triumphs and successes were their guest appearances for the Billy Graham Crusades, the Liberty Bowl and the Presidential Prayer Breakfast. The Blackwood Brothers have recorded over two hundred albums, toured in forty-seven countries and won eight Grammy Awards and six Dove Awards. They were inducted into the Gospel Music Hall of Fame in 1998.

James has formed The James Blackwood Quartet and continues to sing solos at special events and has been involved in the Bill Gaither Homecoming videos series. Other members of the quartet are Butch Owens, Wayne Little and Jonathan Mattingly.