(Dec. 23, 2019) — Jason Clark of The Nelons underwent open-heart surgery on Dec. 18. He was born with a heart defect called a myocardial bridge, which can be a harmless condition. However, it caused Jason to experience various symptoms over the past several years, including chest pain and exhaustion.

In a video The Nelons posted on Facebook, Jason shared that he had tried to avoid open-heart surgery, but realized it was necessary after cardiologists and his surgeon explained that he was at risk of a serious heart attack if he didn’t undergo the operation. 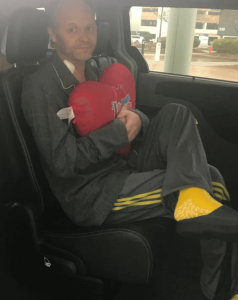 Jason heading home from the hospital

Kelly added that the surgeon told them Jason would feel like he was 20 years old again following his recovery. Having celebrated her 60th birthday on December 1, 2019, Kelly joked, “A 20-year-old is going to be married to a 60-year-old.”

The surgery was more complex than initially expected, but Jason was released from the hospital on the afternoon of Dec. 23. While he is healing, Amber (Nelon) Kistler’s husband, Nathan Kistler, will fill in on vocals and guitar for The Nelons’ concert events.

Please keep Jason and The Nelons in prayer as he continues to recuperate.