Born Oct. 6, 1934, in Brunswick, Georgia, Mr. Stewart began to play piano at the age of 5. Later, he would take piano lessons from fellow Southern Gospel Music Hall of Fame member, James D. Walbert, who helped to shape the distinctive style Mr. Stewart would soon display with The Dixie Rhythm Quartet.

Mr. Stewart was 18 years old when he began playing for The Dixie Rhythm Quartet, and it was while he was a member of that group that he began wearing his trademark red socks. In addition to the red socks, Mr. Stewart would also wear red suspenders and a red tie. 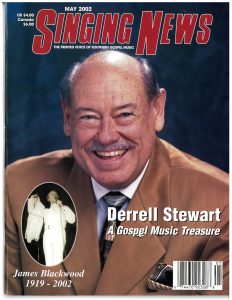 Derrell Stewart on the cover of Singing News Magazine, May 2002

In 1956, the owner of The Florida Boys, J.G. Whitfield, asked Mr. Stewart to consider joining his group. Though Mr. Stewart would discontinue wearing the red suspenders and red tie, the red socks would be a familiar sight at Florida Boys concerts until the group retired in 2007.

Mr. Stewart won the very first Singing News Fan Favorite Musician Award (the award was labeled “Favorite Pianist” at the time) in 1970. Several other awards would follow during the next 37 years, including the 1999 induction into the Gospel Music Hall of Fame as a member of The Florida Boys, and his personal induction in the Southern Gospel Music Hall of Fame in 2004.

To read more about one of Gospel music’s favorite personalities, click here.