Nashville, TN (September 18, 2018) – StowTown Records is thrilled to announce the release of the highly anticipated concept video from The Perrys, “It Carried Him.”

Group member Troy Peach shares, “This song painted such a beautiful picture in our minds when we first heard it that we knew we had to create a concept video for it. Wayne Haun and Kirk Talley have created a powerful song with a timeless message.” 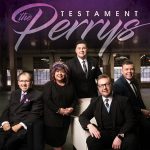 “This video holds a special place in my heart,” reflects Libbi Perry Stuffle, “because it was recorded at the home of my beloved Tracy’s best friend, Tim Dillman. It’s another way to honor the memory of my Sweet T.”

“It Carried Him” is the newest single from The Perrys and is on their current CD and forthcoming DVD, Testament. Both are distributed worldwide exclusively by Sony/Provident. You can watch the video on The Perrys new YouTube channel HERE,