The funeral service for Dr. Jerry Goff is available for viewing here. The service begins around the 14-minute mark.

Born in Greenwood, South Carolina, Jerry spent most of his early years in Arizona, Washington, and Oregon. The son of a Church of God preacher, Jerry was exposed to Gospel music and the Word of God long before he could walk or talk—and upon the family’s return to the South during Jerry’s teen years, he fell in love with Gospel quartets. 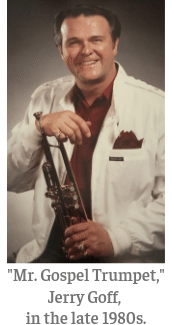 It is through Gospel music that most people became acquainted with Jerry Goff. Though Dr. Goff had sung frequently with his own groups during his college days, it was a group known as The Thrasher Brothers that introduced Dr. Goff to the national Southern Gospel Music audience. From January 1967 until April 1971, Dr. Goff’s trumpet playing and singing was a highlight in any Thrasher Brothers performance.

Dr. Goff launched Jerry & The Singing Goffs the very next day after leaving on good terms with The Thrasher Brothers and until the late 1980s, the Goffs were one of Southern Gospel Music’s most sought-after groups. It was during those years that Dr. Goff earned the moniker of “Mr. Gospel Trumpet.”

Following the retirement of the group, Dr. Goff turned his attention to evangelism and solo music work. Maintaining a heavy schedule, Dr. Goff worked nationally and internationally, preaching and singing in church services, revivals, and crusades, as well as many Southern Gospel Music events such as the National Quartet Convention and dozens of “Singing At Sea” cruises. It was only during the past three years that Dr. Goff purposely began easing out of the spotlight, while encouraging the younger members of the Southern Gospel Music community to step forward.

Dr. Goff is survived by his wife, Jan Buckner-Goff.

Funeral arrangements for Dr. Goff (UPDATED as of July 15):

Visitation will take place from 12 Noon until 2 p.m. (Eastern). The celebration of Dr. Goff’s life will begin immediately following visitation.

The schedule for interment services on Tuesday, July 23 remain as previously announced: 2 p.m. (Central) at Woodlawn Cemetery in Nashville, Tennessee.

Both services are open to the public.