(Nov. 11, 2019) — Actor/entertainer Randall Franks has released a new performance video of his single “What About All These American Flags?” for Veterans Day. The song features Franks sharing his talents as an Appalachian storyteller and fiddler, accompanied by a group of talented youth who provide musical and vocal support for his original recitation.

The 2019 Old Time Country Music Hall of Famer, known for his role as “Officer Randy Goode” from TV’s In the Heat of the Night, wrote the piece to honor veterans.

Watch the video for “What About All These American Flags?”:

“In my hometown of Ringgold, Georgia, twice a year volunteers raise flags in honor of our deceased veterans, and nearly a couple thousand flags line our streets,” says Franks. “My father Floyd’s casket flag is among them, as are many of those from our family. It moves me each time I see the display, and I am so thankful to the volunteers who make it happen.

“I wanted to craft a story that reflects the emotional connection to these flags and the veterans they represent,” he continues. “I chose a grandfather talking to his grandson to impart a lesson that none of us should ever forget.” 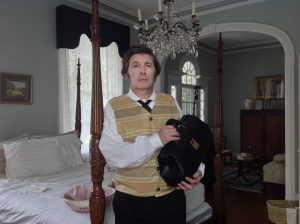 Randall Franks as ‘Dr. J.A. Anderson’ on the set of ‘The Crickets Dance’

Franks also recently completed filming for his role as “Dr. J.A. Anderson” in The Crickets Dance, a feature film based on the novel by Deborah Robillard.

The Crickets Dance is expected to release in 2020.