March 31, 2019 — Following The Perrys‘ bus accident the morning of March 29, many have been concerned about vocalist Andrew Goldman, who was driving the bus at the time. On March 31, he posted this update on Facebook:

I considered doing a video update, but my voice is still recovering. I’ve received so many calls, texts, and messages and I’ve done my best to respond. I am a blessed man. I have felt every prayer spoken.

There’s no doubt in my mind that God had his hand of protection over our bus on Friday morning. Originally I saw the vehicle in the southbound lane with sparks coming from its front left wheel moving at a decent speed. I figured someone had blown a tire and the wheel was grinding on the road. At that point, I never saw the entire wheel and tire before it hit the bus, however I did hear it bounce. Thankfully because of this I did not tense my muscles until after the impact so my soreness is mainly in my shoulders and arms.

The majority of my injuries were to my face due to the amount of glass that flew through the bus. At the time the EMT arrived, I was treated for the cuts and was not aware of any glass in my throat or lungs. I checked out ok at that point and resumed making sure the bus was ok and the other vehicles involved were ok. 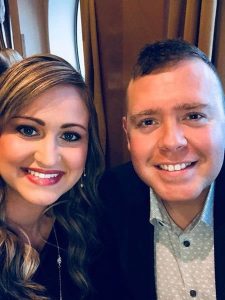 Andrew with his wife Rebecca

I’ve battled sinus issues this week, so as I began to deal with these I noticed when coughing I had pieces of glass in my mouth and sinuses. This is where my incredible wife steps in. After speaking with her she urged me to go to the ER in Indianapolis immediately instead of going home. After thoroughly being checked out, the doctors saw no concern and any large foreign bodies of glass in my lungs or chest. They were unable to see minute pieces but saw no concern. Other than the lacerations on my face and ears, and bruising in my throat, the only other scratch I had was on my left eye, which is being treated with antibiotic.

I’m so thankful to the Lord for keeping his hand of protection on me, as a few inches could have made our story a much different one, but I’m thankful no one else was hurt. He must not be done with me yet. I’m still pulling glass from my ears, eyes, and some from my teethe, but I’m alive and breathing. While I’m taking it easy on my voice to let it heal, I’m still with the group this week and behind the wheel as well. This is just a hiccup, and will not keep me from doing my job, nor what God has called me to do.

I appreciate everyone’s prayers more than you’ll ever know. I do apologize for the fairly gross picture of my face after the incident, I look much better now. I’m also extremely thankful for my wife for taking incredible care of me and for my mother for riding with her to Indianapolis to take care of me and help get my stuff off of the bus. I could not imagine my life without them.

Rebecca Goldman, you are my angel. I’m thankful God has given me another day to be your husband. Also thankful that you love me still with my rough looking face. God knew you were the one for me when He created you. I love you!

Thank you everyone for your continued prayers as I recover. God is good!