Todd, NC (January 17, 2019) — For Gospel singing sensation Michael Combs, the month of January is the anniversary of a most important day in his life. On January 9, 2017, Michael received a drastically needed kidney, and the surgery was a complete success, enabling Michael to continue the call on his life of singing and ministering the Gospel. 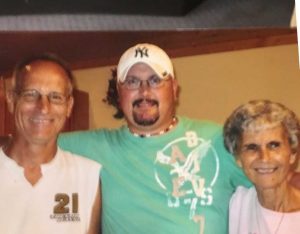 In many cases the good news of receiving a kidney for transplant comes as the result of a tragedy to the family of someone else. This was the situation for the Norton Family. Randall Norton of Harriman, Tennessee, the only son of Trula and James Norton, died on Jan. 6, 2017. He was killed on his motorcycle while on the way to work.

When organs are donated by a departing individual, the parties are not allowed to know who donated or who received the organ donated. In an effort to find some good in their son’s passing, the Nortons sought to find out who Randall’s kidney went to and how that person was doing. To their dismay, they could not find out. At the same time, Michael wrote a letter expressing his gratitude to his donor’s family and signed it only “Michael.” He asked the foundation to please get the letter to the donor’s parents.

UT Medical Center in Knoxville, Tennessee had mailed the Nortons the card Michael had written, but for some reason it took a year for the card to reach them. After finally receiving it, Mrs. Norton called UT several times about the card because she was so blessed by Michael’s words. His was the only card they received out of all the organ recipients.

In October 2018, when Michael performed at Dollywood during the Gospel Festival, he was telling the audience how the Lord has blessed him through the years with his health. He mentioned the date of January 9, 2017, when he was blessed with a new kidney. Someone in the audience knew the Norton family and knew Randall was an organ donor, so they told the family what Michael had shared from the stage.

Trula Norton’s sister Deanna got on Facebook and social media to find ‘that famous Gospel singer’ and found Michael Combs. She told Trula, who called UT Medical Center and asked them if Michael Combs was the one that sent her that card. She was told they could not tell, but maybe she could contact him and find out. At that time, she made her first phone call to Michael’s office. 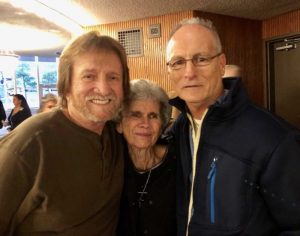 Michael’s wife Denise says, “Trula Norton’s phone call wasn’t the first call that had come into Michael’s office saying they knew who the donor was. However, this caller did say they had received a letter that they thought was written by Michael Combs.”

On January 5, 2019, Trula and James Norton went to see Michael Combs in concert and brought the letter with them. What an event that was, allowing all of them to have some closure from everything that had transpired between Randall’s death and the miraculous help for Michael.

Michael shares, “The gift of Randall’s kidney has meant far more to me than I can say with words. It has given me ‘new life.’ It’s given me the opportunity to continue doing what I’ve been doing for almost 30 years. To be able to travel and sing without any restrictions. To not have to go to a dialysis clinic three times a week! To be able to continue to share my story. The kidney transplant is another chapter in the story of God’s goodness and grace that He has shown to me in my life. Only God knows how many chapters are left to write.”