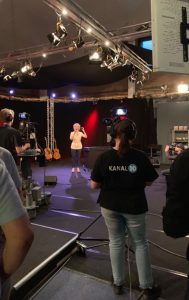 Last New Year’s Eve, Lindsey was invited to sing at a conference that was televised throughout Sweden. Channel 10 covered the concert and invited Lindsey back to do a series on worship, teaching, speaking, and singing. The show will be called Conversations with Dr. Lindsey Graham and will air at a later date.

In preparation, Lindsey was able to film behind-the-scenes footage of the recording studio in Nashville, as well as a conversation with her producer, Jason Webb. She later recorded five other episodes in Naples, Florida. The footage highlighted exchanges with her parents and with her worship pastor. A Swedish television crew followed Lindsey to several concert venues to film behind-the-scenes footage before and after the concerts. They also filmed an informative interchange with Swedish concert promoter, translator and friend, Joakim Sunesson.

Lindsey stated, “I am thrilled for this opportunity. A TV show was not even remotely in the back of mind! It is truly an opportunity from the Lord and I pray He continues to reveal who He is to the people of Sweden and around the world. We need Him now more than ever. If God leads you to, I so appreciate your prayers and encouragement. It is apparent the Christians in Sweden have a heart for the Lord and a desire to serve and worship Him. I hope to merely step alongside the Church in Sweden, encourage them to cling to their faith, and reach their family, friends & neighbors for Christ in the process. God is faithful.”