Born July 14, 1956, Larry dedicated his entire life to Ministry at the young age of 11 years old. In June 1967, he began to preach the gospel. In December of that same year he stepped on a platform for the first time to sing with his family at a little church revival and the “The Original Hinsons” were formed. By 13 years of age, he was in full-time ministry, singing the gospel and spreading the good news about Jesus, alongside his brothers Kenny and Ronny, and his sister Yvonne.

The Hinsons wrote and recorded timeless classics such as “The Lighthouse,” “Come To the Water,“ “Joy Comes In The Morning,” “Call Me Gone,” “That I Could Still Go Free,“ and many more. The Hinsons made weekly appearances on “The Gospel Singing Jubilee,” and the group was inducted into the Gospel Music Association Hall Of fame in 2006.

A licensed minister with the Assembly of God since 1980, Larry took on the call of full-time evangelism to further God‘s kingdom in 1981. His lovely wife, Jana, walked this journey alongside Larry for 44 years. In that time they appeared on numerous television program, including the Trinity Broadcasting Network (TBN & Daystar).

The graveside service is reserved for family only.

In lieu of ﬂowers, donations may be made to P.O. Box 833, Hendersonville, TN 37077, or at www.larryhinsonministries.com.

The Hinson family thanks you for your prayers and the respect of our wishes. 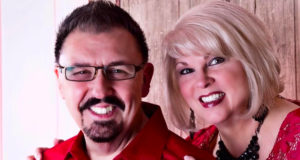