March 19, 2019 — Singing News has learned that Dave Kyllonen, a longtime member of The Couriers, has passed away after an extended illness.

Dave joined The Couriers in 1955 as the bass singer. When Phil Enloe stepped down as baritone in 1968, Dave transitioned into singing bass/baritone, and the quartet became a trio. He toured with The Couriers until 1980, when he left to be a missionary to the Caribbean. He later became a pastor in Iowa and also formed the group ‘Homefire’ with his family. 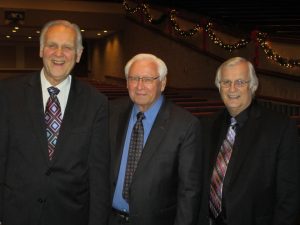 In 2001, he reunited with fellow Couriers Duane Nicholson and Neil Enloe for an “original Couriers” reunion concert. It was so successful, they performed together for many years under the name “Dave, Duane, and Neil.”

In all, The Couriers shared the Good News for 55 years, traveling to all 50 states, as well as 80 nations all over the globe. They also recorded more than 40 albums and garnered three Dove Awards.

Prayers are appreciated for Dave’s loved ones during this sad time. His daughter Connie posted on Facebook, “Our dad, Dave Kyllonen. has passed away and is now with Jesus!! I can only imagine what it will be like! Another soldier has gone home!”

We will post more information as it is learned.