Greater Vision’s Gerald Wolfe and the family group The Kramers have an exciting event to look forward to in 2019. The day after the National Quartet Convention ended, Gerald’s son Ben and daughter-in-law Maria (the daughter of D. Scott and Rachel Kramer) found out they were expecting. Maria’s due date is June 5, 2019, and the couple learned on Thanksgiving that they are having a baby girl. 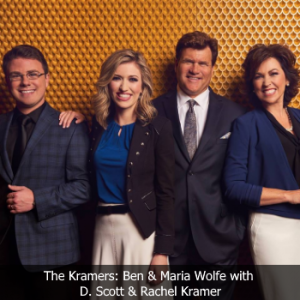 No word yet on what Gerald’s “grandpa name” will be, but he bestowed a nickname on his grandchild (before knowing she was a girl) during Praisefest in mid-November. He announced the happy news to the crowd and referred to the baby as “Gizmo.” We’re guessing that nickname may not stick.

On November 30, Maria shared on Facebook what the little one’s actual name will be:

Elizabeth Noel Wolfe. From before she was even a thought, we knew this would be her name. One day when Ben and I were first married, we were traveling in the car and daydreaming about names for our future babies. Elizabeth was our favorite girl name, hands down. Many of our family members have this name as a middle name, and we think it’s such a gorgeously timeless name that it deserves to be a first name.

Elizabeth also means “God satisfies”, and we are believing and trusting that God would be the One that satisfies her little heart! (Oh, and Pride & Prejudice is my favorite movie – Elizabeth Bennet!)

Noel is the French word for “Christmas.” Christmas is our favorite time of the year.

Our congratulations go out to the Wolfe and Kramer families, and we look forward to Baby Elizabeth’s arrival.