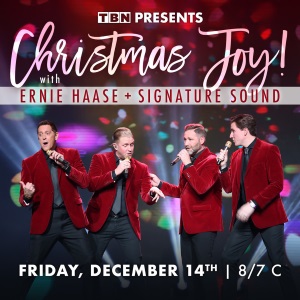 “Christmas Joy” was filmed at TBN’s Holy Land Experience in Orlando, Florida. EHSS performs their most beloved Christmas songs, including “Every Light That Shines at Christmas,” “Changed by a Baby Boy,” and “What Child Is This.” They also stage several new songs from an upcoming Christmas project (scheduled for 2019).

ABOUT ERNIE HAASE & SIGNATURE SOUND:
From its formation in 2003, EHSS has become one of the most popular and beloved quartets in Gospel music. EHSS has earned a GRAMMY ® nomination (2019) and multiple GMA Dove Award wins throughout the years. Additionally, the group is a radio favorite in the United States, as well as internationally, and a leader in CD sales and long-form music video sales with several RIAA®-certified Gold® and Platinum® DVDs. Ernie Haase & Signature Sound is comprised of Ernie Haase, Devin McGlamery, Dustin Doyle, and Paul Harkey.