Nashville, TN (November 19, 2018) — In 2017, Matt Felts released his debut solo project, Based on A True Story, that included an all-star cast of guest artists including Joseph Habedank, Larry Gatlin, Goodman Revival, Richard Sterban, Darryl Worley, and others. Featured on the project was the song “The First Baseball Game” with a very special guest, baseball legend Don Mattingly. 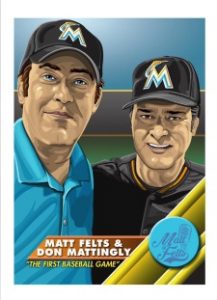 The project also included a special edition baseball card featuring Don Mattingly and Matt Felts. Mattingly played for the New York Yankees and is currently the manager of the Miami Marlins.

Recently, Matt Felts was asked to donate a copy of his project, Based on A True Story, to the Baseball Hall of Fame. The CD will be added to the Hall’s permanent collection and will be used in their displays.

“I want to thank Don Mattingly and the Miami Marlins again for making this dream a reality. They went out of their way to be part of this project and I truly appreciate it,” Felts says.