Nashville, TN (January 15, 2019) — It’s with much pleasure that Les Butler announces the signing of one of the strongest trios in Southern Gospel music—Barry Rowland & Deliverance. 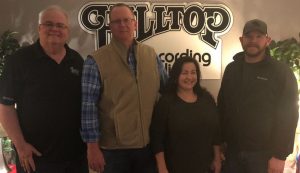 Les Butler states, “If I had to choose a phrase, I would say ‘unbridled excitement’ is what I feel about this new addition to the Butler Music Group/Family Music Group stable of artists. BMG will be offering management support, and FMG will be the new home label for one of the most powerful vocal lineups in our industry. I am producing their new album as we speak. During the tracking day, we felt the tangible presence of the Holy Ghost in that studio. This is going to be special!”

Barry Rowland states, “We are very excited to announce our partnership with Les Butler. Over the last decade, Les has joined us on piano, singing, and testifying at occasional events. Now, we connect further to entrust our radio promotion, ministering events, recording, and other efforts to the capable hands of what we consider to be an ambassador in the industry of promoting genuine Gospel music. He’s been instrumental for several decades in supporting Kyla Rowland songs and many other endeavors that deliver the message of Jesus Christ. Through all these experiences together, one unmistakable factor is evident—our passion and unwavering thirst for authentic worship is equally yoked with Les. We have prayed, worshiped, and ministered together. We have cried, laughed, and broken bread many times. One clear message transcends through our heart—when the Holy Spirit speaks and moves, our discernment, awareness, and sensitivity to His voice yoke together. Stay tuned for future announcements regarding this partnership and other exciting news from Barry Rowland and Deliverance.”

Butler continues, “If I recall correctly, the second song I ever played on Southern Gospel radio nearly 41 years ago, was, ‘He Will Roll You Over the Tide,’ recorded by The Inspirations and written by Kyla Rowland. I have traveled the country to hear Kyla and her brother, Ron Martin, sing. And now, to be intimately involved with her son’s family is a dream come true. Simply stated, I am humbled.”

Be looking for more big news from Barry, as well as BMG/FMG. The new album, yet to be titled, will be released in the Spring of 2019.
For more information on Barry Rowland and Deliverance, visit them at barryrowland.com.